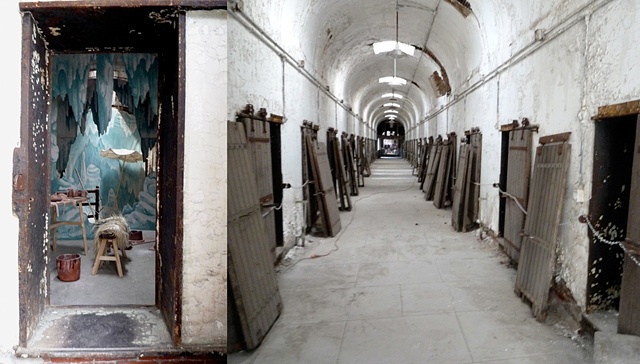 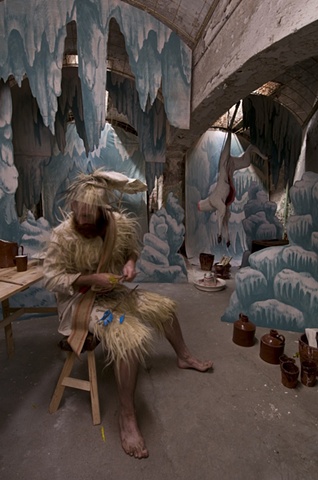 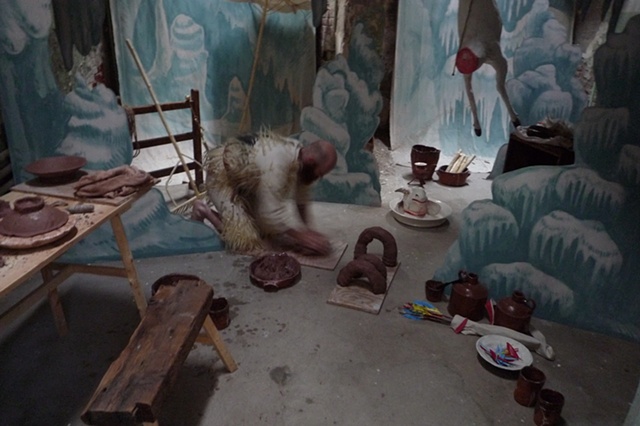 In contemplating the early Quaker principle of solitary confinement as a reformative treatment for inmates at Eastern State, I was drawn back to a theme I have used before in my work; Robinson Crusoe. I am distantly related to Alexander Selkirk, the real life inspiration for Daniel Defoe’s fictional character Crusoe. In both the reconstructed-historically accurate accounts, and Defoe’s expanded fictionalization of my relative, he was a gruff, unruly near-pirate bent on finding riches and glory through dubious naval excursions. His abandonment (or shipwreck) on a small tropical island left him to his own devices, without the intervention or influence of society or comrades. I am interested in the parallels between this story and the assumed story of inmates (perhaps early inmates) at the Eastern State Penitentiary. Forced solitude; the marking or passing of time; the creation of handicrafts out of necessity, boredom, amusement or some imagined or potential commerce. Facing the unknowing void of time ahead of him, Crusoe lost himself in disciplines he had no need of knowing in his prior life. These gave focus to his reflection and a sense of control over his circumstances. Though often fanciful and improbable (such as his production of fired pottery) their simple utility was trumped by the sense of purpose they give their creator. This is in large part where my interest lies: the metaphoric utility of the object. I leave it to Virginia Woolf’s analysis in her 1932 essay Robinson Crusoe: Thus Defoe, by reiterating that nothing but a plain earthenware pot stands in the foreground, persuades us to see remote islands and the solitudes of the human soul. By believing fixedly in the solidity of the pot and its earthiness, he has subdued every other element to his design; he has roped the whole universe into harmony. And is there any reason, we ask as we shut the book, why the perspective that a plain earthenware pot exacts should not satisfy us as completely, once we grasp it, as man himself in all his sublimity standing against a background of broken mountains and tumbling oceans with stars flaming in the sky?